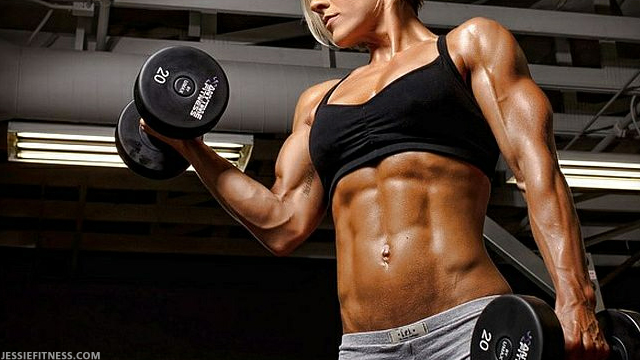 For a lot of guys the last thing you’d want is to be beaten by a women in an arm wrestle after a few beers down the pub, but for some men there is nothing sexier than a muscular female body-builder.

Female muscle fetish describes a fetish for women who lift weights, body build and are excessively ‘big’ and muscular. Far more extreme than the ‘athletic’ or ‘fitness chick’ look, a person with a fetish for female body-builders is attracted to huge biceps, broad shoulders, powerful thighs, a wide back and features which are generally large.

So what is it about these stacked, Amazonian women which certain men find to be so sexy?

Sthenolagnia is a term which describes “a social behaviour, usually with a sexual aspect, in which a participant, the worshipper, touches the muscles of another participant, the dominator, in sexually arousing ways”. A person with Sthenolagnia is physically attracted to the look and feel of the muscles and may enjoy touching, massaging or rubbing oil onto a person’s muscles, as well as watching them flex, move or exercise.

If sthenolagnia is concerned with aesthetics, then cratolagnia is interested in the use of the muscles, i.e. strength and power. So whilst sthenolagnia and cratolagnia are undeniably linked and often both elements of muscle worship, they can be completely separate, in that one muscle admirer may only care about the appearance of the muscles, and another may only care about strength (perhaps for reasons such as physical domination.)

To take it one step further, wresting can be a huge turn on for guys attracted to muscular women. As well as being squashed and overpowered, some guys would get a thrill out of being picked up, thrown down and wrestled into a ball. In Japan there is such a thing as humiliation wrestling in which small men are wrested and overpowered by bigger, stronger women.

Muscle fetishism is likewise a big deal in the gay community, with many smaller homosexual guys being attracted to huge, muscular men (and vice versa). In such a relationship the pair may enjoy the difference in strength and stature, that one is the top/ Dom and the other is the bottom/ sub, though this is of course not always the case. They say “opposites attract” and this is often, so it’s quite simple to understand why a small, slender man would be attracted to a big, broad body-builder.

Have a great weekend, and don’t forget to hit the gym!