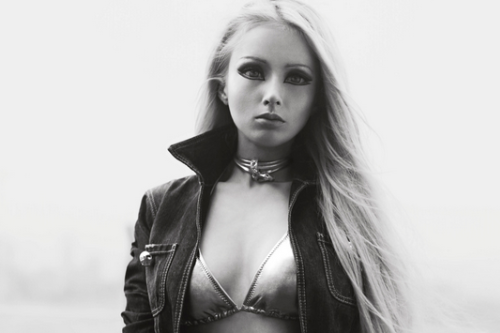 Human Dollification is a fetish by which a person is sexually aroused at the thought of themselves or their partner being transformed into a living doll; be that a Barbie doll, Lolita, sex doll or even a mannequin.

The underlying psychological motivator, for the ‘doll’, is that she or he is able to remove themselves from the human consciousness and relish being mindless and used as a toy; the doll can then be enjoyed, admired and controlled by the ‘owner’ for his or her sexual pleasure. Having cleared one’s mind of human thoughts and emotions, the doll is able to enjoy the sexual experience without any inhibitions or feelings of guilt.

For the ‘owner’ the experience is highly arousing as he or she has a human doll to play with and use selfishly for their own sexual gratification. The owner can throw the toy around and use it in any conceivable manner without concern for the doll’s thoughts or feelings.

I’m not sure if “Gentlemen Prefer Blondes”, but some guys certainly get turned on by the idea of a ‘brainless bimbo’. The idea of a girl being ‘brainless’ is somewhat like Dollification as she has (stereotypically) an attractive body but lacks the ability to be assertive and think for herself, thus bimbos are generally submissive and do as they’re told in the bedroom.

Recently model and self-proclaimed bimbo Blondie Bennett received criticism in the media for undergoing hypnotherapy to make her “brainless like Barbie”. Bennett had already paid for several physical alterations to make her look more like the doll, such as botox, spray tans and enhancing her breasts to an enormous JJ cup.

Cosmetic surgery certainly has its place in human Dollification for those who are fully committed to looking like dolls, such as Valeria Lukyanova who has undergone numerous cosmetic procedures to fully embody the look of her idol Barbie.

However, a permanent change isn’t always what is desired by human doll fetishist – rather some people prefer to keep their kink in the bedroom where it belongs.

If you desire to let go of reality, just for the night, you can simply dress up for a little role play fun. In fact, for some Dollification fetishists the makeover and dress up phase is a huge part of the turn on. A typical scenario would involve the ‘Dollie’ lying motionless as the ‘Doller’ puts on their makeup, styles their hair and dresses them up in a costume of their liking. Dollification isn’t always the hyper-sexualized ‘Barbie look’, rather some fetishists may prefer to dress their doll up as a Cabbage Patch Kid, Rag doll or fairytale character such as Goldilocks.

If the Doller desires a very specific look, such as a porcelain doll, then excessively heavy white makeup will be required. Wait – white makeup, rose-tinted cheeks, vacant look and submissive behaviour? Maybe the Japanese were the first to think up Dollification with their Geisha girls.

Perhaps the kinkiest type of Dollification is when a Doller desires to transform their partner into a human sex doll – just like the kind you buy from a sex shop and inflate! For such a niche you can actually buy full body rubber or PVC suits, and even masks, which will transform a person into a real life sex toy. Such a suit would be sure to have cartoon like eyes, a shiny texture and numerous love holes for the owner’s pleasure.

Ultimately this fetish is all about control and submission; when the Doller is transforming the Dollie, he or she has complete control of how the doll will look and behave. The objectified Dollie likewise enjoys the submissive element and is able to completely let go of reality.

Well I hope this didn’t soil your childhood memories too much!

Have a great weekend.