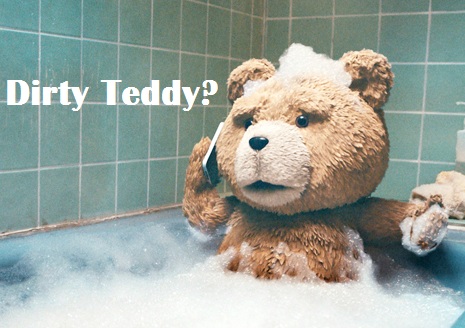 Pretty much all of us have cuddly toys as children, but before we even reach adolescence most of those toys are handed down to a younger sibling or sold with one eye missing at a car boot sale. Some people, however, find it a little difficult to let go of those stuffed animals and instead decide to take things to the next level.

Plushophilia is the term used to describe a sexual interest in cuddly toys or stuffed animals. It seems that ‘plushy’ both describes the soft toy itself and the person who likes to have sex with it, so bare with me here…

So where does this fetish come from? Well like so many perversions it often manifests in childhood. Often a plushy will have been very fond of soft toys and a child and may have a large collection of them as an adult. A plushy collector may be OCD to some extent.

What does a stuffed toy need to look like in order to get a plushy hot under the collar?

The toy can look like anything; aesthetic preference will differ from one person to the next. The toy doesn’t need to have any features which are traditionally sexy like breasts or bulging biceps; a standard teddy bear or Pikachu doll will do quite nicely. Ted… from the movie ‘Ted’ has become a bit of a pin-up in the plushy world.

A fairly substantial subcategory of plushophilia is bronies.

“Brony typically refers to 13-30 year old male fans of the 2010 reboot of the show My Little Pony: Friendship is Magic. Brony = Bro + Pony.”

So yeah, some adult men really lose it over a TV show for prepubescent girls. I guess that’s not too much of a big deal; they just like to make a big deal out of it. There are huge brony communities online, online forums, conventions, etc. Supposedly you greet a fellow brony with a fist bumping then say “bro-hoof”.

For the most part being a brony isn’t a sexual thing. Some guys however are sexually aroused by the ponies. A dedicated brony may even have his toy customised to include a love hole or two.

Plush sex dolls probably fall under the category of plushophilia also. Soft sex dolls are just like your standard ‘human’ sex doll, but rather than being made of silicone or a skin-like material, they’re soft like a teddy bear. I guess fucking a plush sex doll is like fucking an adult Raggedy Ann doll. There is a company called ‘Teddy Babes’ which specialises in making plush sex dolls with pretty faces, big tits and squeezable butt cheeks.

Have a great weekend xx