Only bring essentials with you... 😜⁠ .⁠Imag

Promising to transform any sexy outfit, our lace t 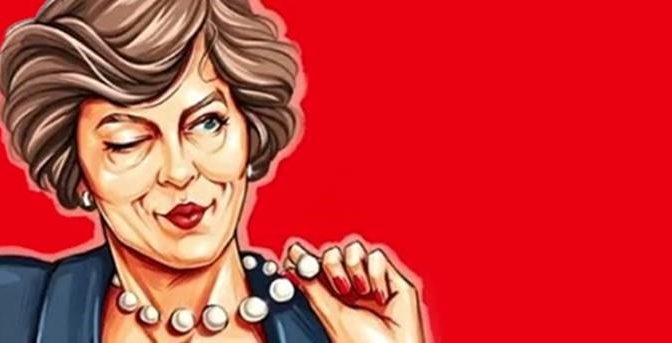 So, Theresa May is seeking an extension eh? Well Theresa, aren’t we all? Ironically, although we know exactly where to get one, should she manage to get her extension, we will be the ones stuck looking at a little prick for the next couple of months. As you are aware, we are total advocates for, and openly encourage bondage, discipline, dominance and submission and sadomasochism. But even we feel uneasy as this Prime Minister so publicly indulges in BDSM with the people of Britain. Without so much as a squirt of lubricant May and her Brexit buddies are constantly fucking us from behind with a tiny dick, and although we don’t feel it now, we can eventually expect a huge mess.

Brexit is like a devious, deep throat marathon, rammed down our pharynx 24/7 and we are sick to the tonsils of hearing the word. You put on the television – Brexit. You turn on the radio – Brexit. If you open a newspaper – Brexit. Find yourself reading a sex toy blog – Brexit. You go to the gym – Brexit. You come on her tits – Snapchat. I digress. There is clearly no end in sight for this hastily concocted linguistic fusion. Unlike ‘hangry’, this is an ugly portmanteau that pisses on everyone’s parade. Okay, so we might not be able to eradicate the relentless, everyday bombardment of, Brexit this and Brexit that, but perhaps we can turn this whole thing into one massive, filthy innuendo?

The Prime Minister Will See You Now

And you do not have to worry about more time. We can assure you a delayed outcome by adding a squeeze of Bondara delay lubricant to your general erection. Not only will it prolong the inevitable, but she can expect the value of the pound to increase too. With the details determined and the backstop firmly in place, the lubricant will allow you to gracefully embrace her hard boarder and achieve the ultimate breakthrough.

It is vital that you do not overshoot your deadline. Ensure a clean Br-exit by pulling out in time and thus, avoid ending up in excruciating labour. Subsequently should relationships go sour, gag all around you as you may end up footing a massive divorce bill. But if the worst comes to worst, and sentiment kicks in, and you are worried about the gaping hole left in her lower chamber, be safe in the knowledge that there is big, fat Johnson poised and ready to get into position.

Now, read that back in the voice of Channel 4’s Jon Snow.

It's a very important thing to remember

@Bondara having our best interests at heart as always 😂

Like what you see? ❤️ Bring some glamour to the bedroom with our sheer robe👉️http://bit.ly/2zHNd0X

To see me in and out the outfit 💋

Rule the bedroom like @willowsky_ with our Enamour Lingerie Set 🌹
👉 http://bit.ly/2XBZX1b

When bondara sends that dispatch email >>>>>